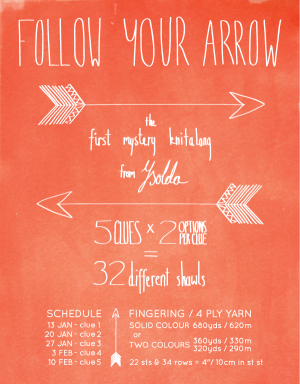 2014 has been the year of the knitalong for me, so far. It all started back in December when Ysolda Teague announced she was holding a mystery shawl knitalong, "Follow Your Arrow", which would allow you to choose to make either a one- or two-coloured shawl, with each clue giving you a further choice between two clues, either of which will work with whatever you chose previously. I signed up on the spot and waited very patiently for the first installment.  I was therefore very surprised to find myself full of excitement on the day the first clue was released. I was reading and re-reading the pattern and discussing it with like-minded people on Twitter and generally feeling like a schoolgirl who'd just spotted her crush in the street. Then I dashed home and pulled out my Leading Men Fiber Arts yarn that I'd been saving for something special.  I was delighted with both the pattern and yarn.   I have kept up with the clues and am ready for my clue 5 today.    I have found the whole process immensely enjoyable and would do it again at the drop of a hat. I am seriously considering making a second shawl from this pattern because how the different sections fit together is so ingenious I'd like to see how they play out in closer detail. I won't be posting any pics here until people have had a chance to enjoy the finished result for themselves but you could go and peek at my project page on Ravelry. I am going to feel rather bereft next Monday with no email from Ysolda to look forward to.

But that's not all. I had got the bug good and proper.  Next was the Fair-Isle-along set up by Nic from the  Yarns From the Plain podcast. Nic's idea here was to conquer Fair Isle once and for all.  I had knitted a couple of colourwork hats for the kids last year, but the results were a little hit and miss. So I joined in with this one hoping it would be the spur I needed to learn how to make my work look as neat as others'. With some reading up and with the help of Ravelry group members I have made a hat I am immensely proud of with even stitchwork, no pulling and no holes. The pattern was the Pemberley Tam by Lion Brand.   I have learned plenty.  Debbie Stoller's book "Stitch 'n Bitch Superstar: Go Beyond The Basics" was my first port of call and I learned how important it is to be consistent in how you carry the spare yarn at the back of your work.  Trying this out on a swatch was a huge eye-opener.  I have since seen the same information on blogs including Little Yellow Cat which has some great pictures showing exactly where I was going wrong.   I learned too about which colours work well for Fair Isle, partly from getting it wrong, pulling out and starting over, but mainly from seeing how other people were using their colours.  All in all, a great experience. Sadly, the hat looks wrong on me - not my shape at all. Still, I'm sure it'll find a home soon. If not, I'll frame it!

I have also joined in the Feller-along hosted by the A Playful Day podcast / Ravelry Group.  Here I chose the Captiva Wrap pattern which uses short rows for shaping.  This was a new technique for me so I watched Carol's free Craftsy class, which I highly recommend, then I was off.  I raced along with this project.  I was using a beautifully squishy DK from Soft Like Kittens which has proved to be as warm and comfortable as it looks. I have worn this every other day since I finished it and it attracts comments wherever I go.

Once again, I found the Ravelry Group members to be a great bunch of people, full of encouragement and generally great fun to hang out with. I love seeing what everyone has been making.

Being totally addicted now, I've joined in with the Stitched Together Designs Group's Winter Warmer KAL. For this I have knitted a small shawl that I was planning, but once again I have enjoyed the camaraderie in the group and have loved seeing everyone's projects grow.  This pattern is the "Pimpelliese" by Christine Ebers knitted in Easy Knit's Biffle-Boo sock yarn. I love the bright colours: they remind me of both spring crocuses and chewy sweets from my childhood.

All of these projects have been immensely rewarding: I've learned new techniques, been "forced" to try things I might not have chosen if I'd seen the full pattern in advance and met many wonderful new people in the various Ravelry groups.  It is inspiring to see how other people interpret the same pattern so differently and how they put yarn together in ways I'd never considered.

I've proudly joined the A Playful Day group's Ravellenics team and am even more proud that we are using my design for our team Ravatar during the games.  My Ravellenics project is more of a marathon than anything else. I'm attempting an Afghan blanket using the Diagonal Rib Mitered Square Blanket pattern by Joan Marie.  This will be a first for me: although I have crocheted many blankets over the years I have never knitted one.  I'm keeping up with my self-imposed minimum of a square a day and hope that by the end of the event I will have a stylish throw to show off.

And what will the next couple of months hold? No doubt, more knit-alongs.. I see A Playful Day are planning some Big Love!
Posted by Happy Debs at 07:13 No comments:

Happy Debs
Avid crafter: knitting, crochet, embroidery, patchwork, sewing. I have even tried bobbin lace and tatting. All this takes back seat to work and the kids but they are happy-making too.